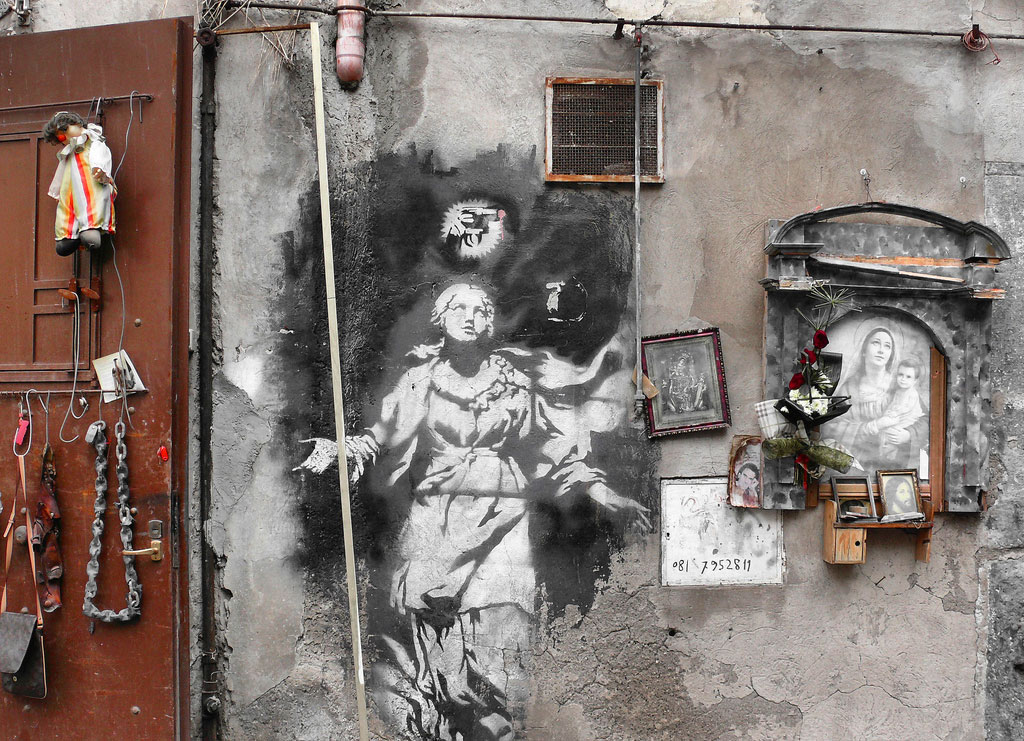 Let’s discover together the speaking walls of Naples!

Although very young, his incredible art has led him to work all over the world. His hyperrealistic faces observe and involve the viewer, proudly exhibiting his distinctive features: two red stripes on the cheeks, typical of the “human tribe” that the artist tends to link through his art.

In addition to the undisputed skill, even on very large surfaces, Jorit’s poetry is always to convey a profound human message: social denunciation, closeness during difficulties, rights often denied, defense of the weakest.

This is how he decides to express his true essence: the transience is the main characteristic of street art, which in his case launches eternal and profound messages. ️ 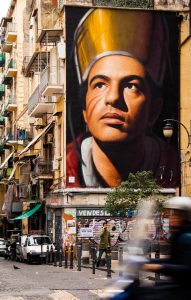 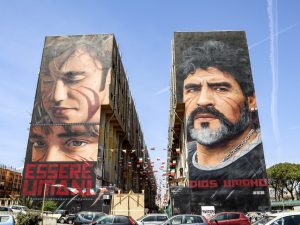 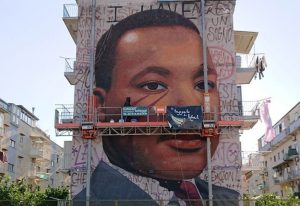 His name needs no introduction: between strong social messages, full of irony and bitterness, and the mystery around his identity, his face and his real name have never been revealed, Banksy has revolutionized the way of making art in recent years, becoming a cornerstone of strictly contemporary art.

Not everyone will know, however, that Bansky’s only work still visible is precisely… Here, in Naples!

The artist twice chose our city to host two of his works: a stencil, now unfortunately covered and disappeared, took inspiration from the sculpture depicting the Beata Ludovica Albertoni, by Gian Lorenzo Bernini. In this case, however, the Beata Ludovica carried a can of coke on her chest and her hand in a bag of chips.

What is still fully visible is instead the #VirginwiththeGun, in Piazza Gerolomini, the heart of the old center of Naples: the halo surrounds a gun, which kidnaps the gaze of the spectator and of The Virgin herself. Some private traders decided to protect it with a store, to preserve its integrity. Naples, the city of #contradictions, seems to be the perfect backdrop for such strong messages! 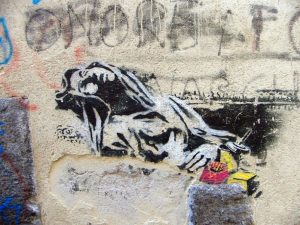 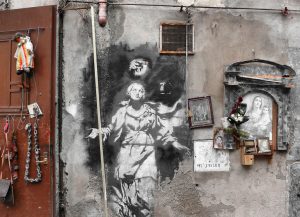 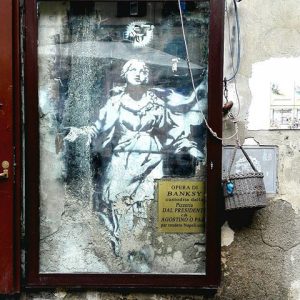 Roxy in the Box

Her style is reminiscent of Pop-Art, both in the iconographic rendering and in its many applications: graffiti, stencils, photography, installations, fashion art. Her soul is pop, colorful, exuberant, but always with a veil of poetry, social commitment and sweet contradictions.

Roxy is Neapolitan: each of her subjects refers to our city, its pains and its victories.

But above all, Roxy is one of us: it can happens to meet her, suddenly, in one of the narrow streets of Naples, developing one of her works, and in the meantime chatting and smiling with passers-by!

Only those who know the Neapolitan soul so thoroughly manage to strike in the sign: the melancholy covered by noise and colors, but never completely concealed. 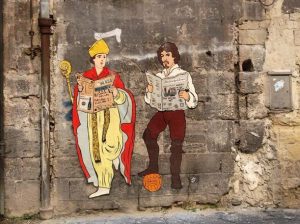 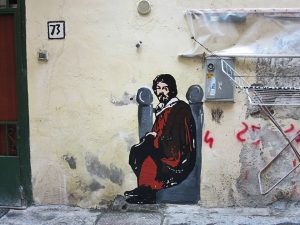 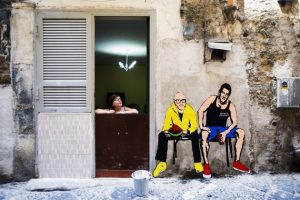 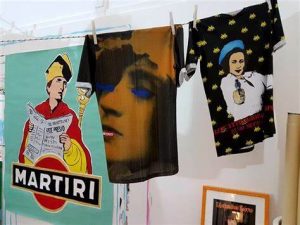 In the pictures we see this great work involving part of the facade of a very particular building: it is in fact the former Military Psychiatric Hospital in Naples.

Blu’s work returns to the very nature of this building: a large green face, whose gaping mouth is one of its barred windows, with the black and white striped shirt, typical of the prisoners.

It was definitely a place of pain and anguish, partly conveyed by the expression that Blu gives to the protagonist of his mural. Behind him, a red face, probably depicting madness, which seems to threaten the “inmate”.

It is a very strong message, almost of human solidarity towards those who too often fell victim to themselves, before becoming executioners.

Today, fortunately, the firmer Military Psychiatric Hospital lives a new life: it is a center of culture and welcome, the spaces are made available to the community and the less fortunate. There were created clinics, spaces for parties and concerts, children’s playrooms.

Not everything is born to stay in the grey zone, and Blu and his work remind it us every time! 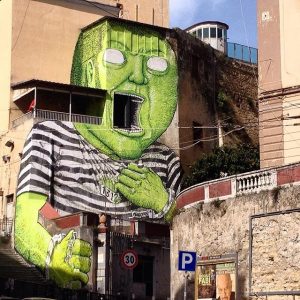 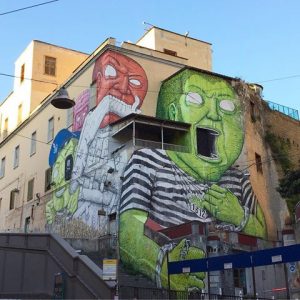 Artworks and historical figures: we will all learn to swim with Blub!

One of the most well-known and loved street artist in recent years that, with its ironic sweetness, leaves everywhere traces of its presence.

Keep an eye on the “speaking walls” of Naples, and you will recognize it in a moment!

His artworks were so appreciated that they became the subject of an exhibition that was held at the National Archaeological Museum of Naples: the archaeological finds were revisited in an underwater key, and equipped with mask and bubbles!

As light and playful as Blub’s art seems, even in this case we can’t help but consider his message: humanity, in recent years, has faced many crises and at the same time forced to overcome them quickly.

Maybe Blub wants to remind us that feeling “with water at the throat” is never a weakness or a limit, but it can only be the right time to stop and… Start swimming in the flow of life! 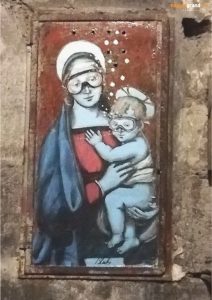 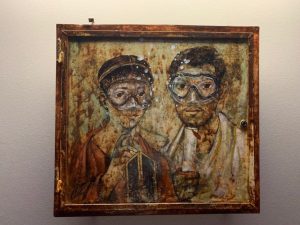 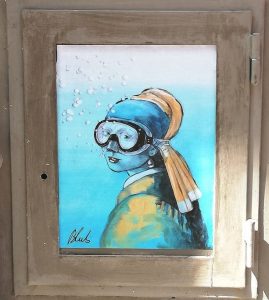 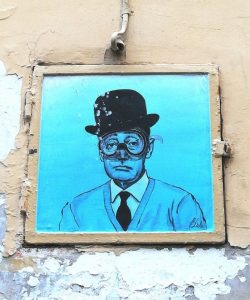 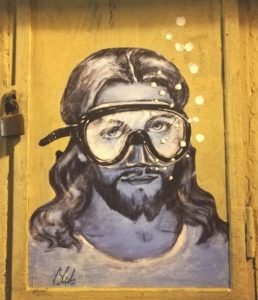 A great innovator and experimenter, he surprised the whole world with the use of an unprecedented technique: the mural in negative, certainly unique.

Bosoletti has chosen Naples several times: he has made entire neighborhoods of our city great canvases for his wonderful masterpieces.

The artist certainly draws inspiration from the human and historical characteristics of the environment he chooses, paraphrasing the text according to his personal vision.

Watching Bosoletti’s work live, in all its majesty, is truly a unique and unforgettable experience! 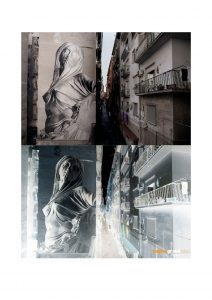 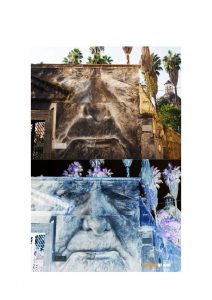 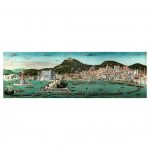 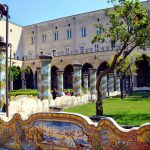 The Hidden Gems of Naples Next
We use cookies to ensure you the best experience on our website. If you continue, we’ll assume that you are happy to receive all the cookies.Read MoreACCEPT
Cookies Policy